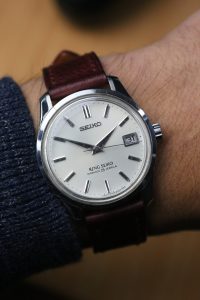 What Do We Have Here?

The watch in question is a King Seiko 4402. A manual wind, time and date piece made of steel circa 1967. With a 35.5mm diameter and slim profile, this is the typical silhoutte of a timepiece born in the late 60’s. You may recognise the design language of this King Seiko with its sharp facets and high polish edges extrapolated to Grand Seiko pieces of today. This particular watch is amongst the first generation of pieces from the manufacture to feature Taro Tanaka’s grammar of design which we will dive into in a moment, but what I can tell you from holding this piece and putting it on the wrist is it absoloutely feels from another time. The watch, on paper would suggest it is quite small by today’s standards, however with its slim bezel and silver sunburst dial, the wrist print feels far more expansive than the diameter it measures. Comfortable and svelte on the wrist, it ushers a feeling of class in its very own distinct, Japaese way. For those with slimmer wrists such as myself, it is a pleasure to wear and lets you rejoice in a time where anything over 40mm was reserved for specified tool watches.

After 53 years, it is truly remarkable just how well the case, hands and dial present themselves. All gleaming proudly with zaratsu polished angles, complimented by hour indices that have received a matching finish. An applied Seiko logo at 12, a King Seiko cosign at 6 rounds off dial side of the 4402. Turns things over and you will be met by a gold Seiko medallion which is bonded to the solid caseback, evidence that this was no entry level timepiece in its day. The lugs are masculine and help provide a sizeable feel of the watch on the wrist. The overall package to my eyes is an articulate expression of less is more. With no extravagant colours or cues, every accent appears more enticing only once you take a closer look. The details in design appear to be carefully considered and exquisitely finished. 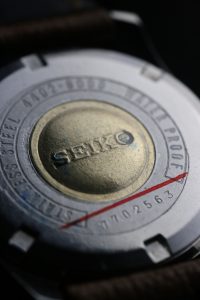 Before Seiko became an amalgamated organisation, the brand was split according to its two factories, the Daini and Suwa factories. The former made King Seiko’s, while both produced Grand Seikos. In present day economy, in-house and vertical integration is common place while inter-company competition is almost non-existent at manufacture level. The Seiko corporation aimed to reap the rewards of a healthy rivalry amongst their houses as they took their products to the Swiss obvservatory trials. These observatory trials were open to brands who wished to submit pieces for accolades of accuracy. In 1968, the Swiss observatory deemed mechanical timepieces submitted by King and Grand Seiko to be the most accurate in their respective categories. These pieces were designated by Seiko as VFA (Very Fine Adjusted), Superior Chronometer or Chronometer. While it is common knowledge that Seiko rained on the Swiss mechanical parade with the onset of the quartz crisis, it is often glazed over the fact that the Japanese manufacture actually beat the Swiss at their own timekeeping game with 1968 coincidentally being the last year the Swiss observation trials were held. As a kid, did you ever spit the dummy and stop playing a game once you realised that your opponent was going to keep winning? I guess the Swiss had that feeling too. While this 4402 is not the exact watch that won such accolades, it belongs to the same family of timepieces that did and reminds you that sometimes watches from across the pond have every right to be mentioned in the same breath as the Swiss.

Not only does this piece show a history of mechanical prowess but also the origin story of Mr Taro Tanaka. His grammar of design represents four core principles, those being all angles are to be flat and high polish to best reflect light, bezels to be two dimensional and simple, there is to be no visual distortion from any angle and all cases must be high polish. It’s fascinating to wear something on the wrist that is the genesis of an artist’s breakthrough design which paved the way for a succesful career and the very foundation of what Grand Seiko is today. There is a reason collectors look for the first example of an iconic timepiece, think Nautilus, Royal Oak, Submariner and with this King Seiko you not only get the first example of a classic dress watch, but an entire brand’s design language. If you took away the battle scars this example has earned over its lifetime, cleaned it up new, it would appear as if it belonged in a sales cabinet at your local boutique today, or any decade since 1967. Isn’t it beautiful when something that keeps time can transcend time too? 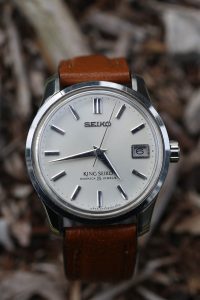 As I mentioned earlier, this is my first forray in the vintage world of watches. Typically my collection consists of modern sports pieces which are built with modern technologies and exhibit just how far the mechanical watch has come in its fundamental form. This King Seiko is arguably the exact opposite. I’ve touched on its ergonomics and feel on the wrist but when you pick up the timepiece, the immediate impression is in its beauty. The hands and hour markers are gleaming as lights hits all the facets and showcases sharp angles as you tilt the dial back and forth. The subtle sunburst dial reveals itself in low light, with strong light offering a clean opaline appearance. A mineral crystal warms the hue of the dial and a small dint in the crystal tells you the material is most definitely not sapphire. I’m a big fan of cosigned dials and while I am not an individual that is affluent enough to participate in a Phillips auction, the Seiko King Seiko cosign is more than enough for me to enjoy a collaboration of sorts, even if it is by two closesly held entities. Everything from the case profile and dial side details makes this a beatiful watch that is distinctly Japanese. Original and iconic, it is easy to see how this has stood the test of time and looks as fitting with my attire today as it would have for its owner back then.

Over the months I have owned this watch, I still roll my wrist just to catch how the zaratsu polish surfaces plays with its surroundings. The slow beat rate of 18,000bph matches the elegant nature of the 4402 and is one of many welcomed indicators that this is a product of another time. Usually the nicks, scratches and imperfections take away from the appearance of a watch, but for something nearing its 58th birthday, it tells a story about how the watch has lived a lifetime before it ended up in my hands. Whether its the blemishes on the indices, marks on the hand stack, patina on the caseback medallion, the watch is all better for it. I continiously wonder who was the individual who purchased it new. What life did they live? How did it find its next owner, or the owner after that? How did it find its way to me? This watch has no direct ties to historic events or esteemed individuals, yet it still creates the similar curiousity of timepieces that change hands at large sums. The watch tells time, but more so a narrative before my time. It constantly reminds me to imagine just what the world would have been like in 1967, how much it has changed and leads me to consider if someday I will elicit the very same feeling when I look at my own collection years down the track. There are watches that are nicer, more accurate, cheaper, dearer, yet they may not inspire emotion like this vintage Seiko. That is, what I understand what vintage watches to be. Inspiration and emotion, whichever way it finds you. This piece certainly brings it for me and I very much enjoy it. 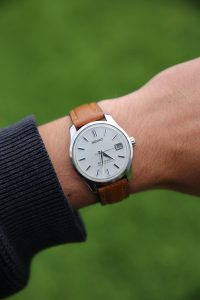 Vintage watch collecting features similar caveats that come with buying pre-owned watches. Within the community there is growing emphasis on the research you should do as a buyer and the trust placed in the reputation of the seller. For this King Seiko, I purchased locally from an individual who had stellar reviews and a long history of sales, particularly in vintage Seiko, King Seiko and Grand Seiko. I asked for more photos of the watch and any proof of the service that was conducted recently. I was happy with what I was provided and took the educated risk. It paid off as the watch was in better condition that I expected, keeps great time and feels buttery smooth when winding. I have not had any issues with my 4402 so far (knock on wood), but it is always important to consider ownership costs should anything such as a bezel deteriorate (they are known to crack easily for this model), a movement service or crystal replacement. I could not be happier with my bargain buy, but I do believe I have got my hands on an excellent example.

I am a big believer in wearing your watches, yet this King Seiko does give me pause before I strap it on for the day as I do not want to be doing anything remotely physical or be at the mercy of untested gaskets should the weather take a turn. While I’m not terrified of wearing this King Seiko (due to its market value), it is however one more thought than I otherwise would have with a modern timepiece. None the less, it is not only an old watch but also dress watch and I will forgive it for not being suitable for day in day out wear.

Seiko and Grand Seiko are known for their unique design language, exquisite value and expertise at every price point. To be able to experience a timepiece that is historically significant for Mr Tanaka and the Seiko corporation while revelling in the mystery of previous owners in another era, this vintage timepiece is always a pleasure to wear, own and admire. Watch collecting is an emotional hobby, so it absoloutely makes sense that enthusiasts may look to old watches to enjoy the very same feelings and thoughts I had while wearing this timepiece. While sums in the millions for a Swiss underline variant of a Submariner or a dot above 90 Speedmaster is something I am still yet to grasp, I am happy to say the 4402 has taught me so many great things about vintage collecting and watch collecting as a whole.