Welcome to another long-term review of a piece that makes part of my own collection, the Orient Kamasu in teal. The diver has more than just its good looks to offer and has been pitched as the new king of the sub $500 sport watch segment, but can it knock the Seiko SKX off its perch? 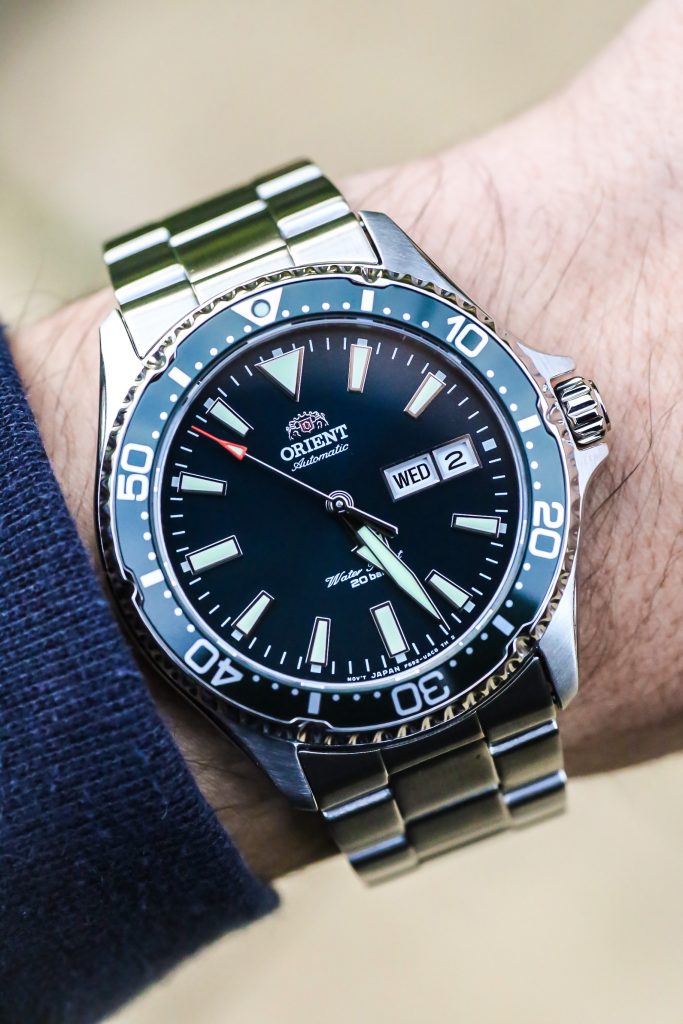 The Orient Kamasu comes in at 41.8mm wide, 46.88mm lug to lug, 12.8mm thick and a lug width of 22mm. The steel bracelet features a fold over safety clasp and double push button release, stamped with an Orient insignia and folded end links. A steel caseback complete with dolphin motif, contributes to the watch’s 200m water resistance along with a screw down crown. The F6922 automatic caliber holds 40 hours of power reserve, quoted accuracy between -15 +25 seconds a day with both hand winding and hacking functions (can’t say that about the SKX can you now?). A sapphire crystal (again SKX who?) shields the beautiful teal, subtle sunburst and almost gradient dial from rain, hail or shine.

Popping the Kamasu on the wrist, the short lug to lug dimensions and relatively slim case profile make the watch wear a lot smaller than the numbers would suggest, it could easily have fooled me into thinking it was a 40mm piece. The initial fit is superb, suiting my slimmer 6.5 inch wrist and is a great example of balanced, wearable proportions that many brands have not prioritised in recent years. The Kamasu is delivered on a steel bracelet and even with its folded end-links, stamped clasp and squeaky pins (and when I say squeaky I mean chirpier than a parrot) it holds the hefty Kamasu case nice and proper, which can be fitted accurately with 4 micro-adjustment options. Links are removed by a simple push pin system, common practice in this price point.

There’s no denying it, the dial is without a doubt the focal point. When it comes to ocean exploration blue is often the colour of choice, however the teal alludes to the mysterious depths rather than the crystal clears of the Bahamas. By far the most dynamic dial I’ve seen on a dive watch, the range of colour the Kamasu possesses is beyond impressive, regardless of price point. In the winter months the dial and bezel spend most of their time offering a squid ink black colour if you will, while in warmer parts of the year as a beautiful blue green tone in that is reminiscent of the colourful scales of the timepiece’s namesake (Kamasu is Japanese for barracuda). The best part is that on any given day, at any given time you will be able to look down at your wrist and see a version of black, blue or green anywhere within that sliding scale. Green watches may be the flavour of 2020, but there is a distinct differentiation between the teal of the Kamasu and any other popular green sports watch on the market today.
The dial doubles as a lovely backdrop for the steel surrounds of the hands, indices and even applied logo. The high polish surfaces refract light in a way that looks absolutely premium. A red tip seconds initially looked out of place, but once Sunday rolls around, the dash of red compliments the date wheel and even the shield of the Orient motif. Described by the brand as teeth like hands and markers, the aesthetic of the timepiece is sharp yet playful, nautical yet versatile, familiar yet distinct.
No surprises here, the lume is properly vivid. The dial and hands are given a substantial amount of what looks a lot like Seiko lume in colour and strength, offering an abundance of child-like simplistic joy of seeing something glow in the dark.
(Orient and Seiko have a parent company in common, Epsom. This is not to say they work in partnership, but have been known to share parts or resources) 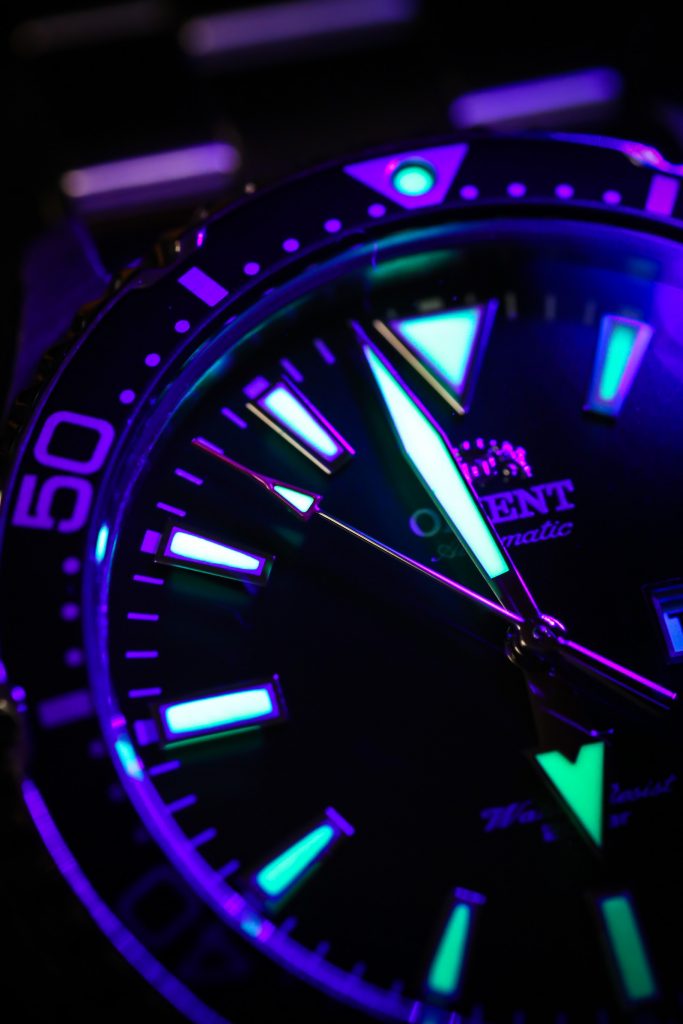 Interacting with the Kamasu, the bezel action is taught with each of the 120 clicks giving great satisfaction to the hands and ears. There is some play in the mechanism, yet I can’t say it was particularly poor and ultimately upholds its primary purpose to prevent understatement of dive time. While the screw down crown does not thread nicely nor is winding the mainspring particularly special event, I am very grateful the function exists. When I owned the SKX I couldn’t help but feel like a neanderthal, shaking my watch every time the mainspring had relaxed to start it back up again. While there is nothing wrong with the old watchmaker’s kickstart, it does feel nice to confidently prepare the mainspring at the start of your day and know that the watch is ready to go. And for those of you who are curious for accuracy, rejoice that the F6922 lets you sync your Kamasu to the second. I personally don’t keep detailed records on the accuracy of a timepiece, but am glad to report the Kamasu did not deviate from its prescribed delta. The quickset date function feels more robust than other watches under $500aud and I had no trouble cycling through the days and dates at pace without concern for any strain I may be putting on the automatic calibre.

To dissect a watch under $500AUD that boasts a sapphire crystal, 200m water resistance, automatic movement with hand winding and a glorious dial seems a touch critical, given just how much diver you get for the money. However, the smallest details can make the biggest difference in the purchasing decision.

The main gripe for me is that this watch is heavy. Not platinum Royal Oak heavy, but heavy for a steel diver with hollow end links and stamped clasp. I’m not sure why. It feels like the caseback and movement could be the culprit and while this may not be an issue to those with larger wrists or enthusiasts who appreciate heft, I found the weight to be a limiting factor for comfort after wearing the Kamasu beyond the 9 or so hours of the working day. The OEM bracelet does a good job of securing the watch to the wrist and does its best to avoid a top heavy feel, but I wonder if aftermarket options for the Kamasu may improve on-going comfort just that much more, potentially balancing out the weight distribution. Other wish list items I had, such as solid end links, colour matching date/day wheels, tapered bracelet are all things I would like to see, however I can’t expect such changes to be made and the watch to remain at its price point. To ask for these niceties would push the watch over the $1,000 mark and I feel the enjoyment of the Kamasu would be hindered more so than improved. Between you and me, I also give the white day/date wheel a pass seeing as apparently Patek Philippe hasn’t quite figured it out either.

Well, chances are if you’re reading this you’ve owned the SKX. It’s the OG. The gold standard for entry level automatic sport watches. Possibly the yardstick of all dive watches. It needs no introduction and we all know the importance of the Seiko SKX to the watch community.
It’s quite different to the Kamasu. Even with objectively inferior specifications, there is no denying the appeal of the SKX through its long lineage of military, cultural and practical provenance. From my experience, the SKX provokes enjoyment through allowing you to revel in its legend when it sits on your wrist while the Kamasu impresses via its sharp aesthetic and contemporary watchmaking. Collecting can be as emotionally or practically driven as you choose, so it is highly likely you have a favourite of the two already. It’s Bmw vs Mercedes, Iphone vs Android, Nike vs Adidas. You have a preference that likely can’t be swayed and that is awesome. It just so happens the Kamasu is my preference with its appearance and componentry reigning supreme.

To put it briefly, the Orient Kamasu is among the best offerings in the entry level automatic sport watch market. It’s alluring aesthetic and impressive specifications make it a formidable rival for watches at and above its price point. Yes, a value packed mechanical dive watch from Japan is not new to the watch industry, but this modern execution in a new colour makes it fresh and enjoyable as anything that has come before it.